Ever since I was a child, watching Dr Emmett Brown and Marty Mcfly take to the skies in the iconic Delorian from the Back To The Future franchise; I have dreamt of one day emulating them in a sky worthy car of my own, obviously minus the time travel (unfortunately). I believed this dream to be plausible when during an episode of Tomorrow's World on the BBC in the 1990's they featured a vehicle that had me more excited than a rather chunky chap with a sweet tooth being given the keys to Willy Wonka's chocolate factory; the vehicle they discussed was the Moller Skycar, and it was mentioned on the show that it was expected to be on sale in the year 2000. The millennium came and went and 13 years later I am still no closer to owning my very own flying car. I felt it was time to do some investigating as to whether this dream of mine ever has a chance of becoming a reality or whether it is about as likely as a white male winning the 100 metre sprint at the next Olympics. Thankfully I was pleased to discover there are now a few genuine flying cars in existence today if you possess the money, and in some cases bravery, to own one. 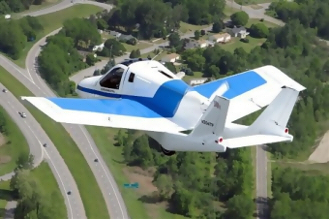 First I will start with the above "Terrafugia Transition", although the current model of this genuine flying car is about as sexy as an 80 year old female former world champion gurner whose face has locked into the championship winning gurn, it is still a very impressive feat of engineering as it is capable of driving both on the roads as well as once at an airport runway deploying its wings which fold from against the vehicle and taking off into the sky. The Terrafugia Transition is scheduled to go on sale to the public in 2015 with a price tag believed to be around $279,000 (£179,000). In May 2013 Terrafugia announced the successor to the Transition, the TF-X, which they hope will be on sale in 2021. The TF-X if the artists impressions and the demonstration videos are to be believed will be a much more aesthetically pleasing machine with the, I believe very important facet in that it will be capable of vertical take off and landing removing the need for airport runways, the TF-X is also planned to be fully autonomous in that you tell it where you want to go then sit back while it takes you to your destination. 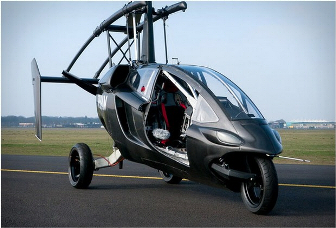 The PAL-V (Personal Air and Land Vehicle) reminds me of a three wheeled road worthy miniature “Air Wolf” for those of you born in the 70s or early 80s. It is designed by a Dutch company of the same name as the vehicle, and takes to the skies as a gyrocopter rather than a plane and can be transformed from a land to air vehicle in a matter of minutes. I believe the PAL-V definitely has the looks that a flying car should have and also is a little more agile in its land vehicle form, 112MPH is said to be the top speed on both land and air and although the three wheeled configuration leads you to believe it will be about as stable in the corners as an inexplicably drunken greyhound with only three legs, this assumption would be incorrect as the PAL-V leans into the corners much as a motorcycle does, which greatly increases it's stability. The PAL-V has already successfully completed test flights and the designers hope that the vehicle will be on sale in or around 2014 for approximately $300,000 (£191,000). 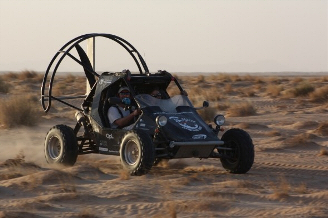 Next up is a totally different take on the flying car, this is the Parajet Skycar and although this vehicle is the least technologically advanced of the afore mentioned and probably the most dangerous it still looks incredibly fun to drive/fly. Parajet Skycar is a British invention which is basically a dune buggy which achieves flight on the simple but effective basis that it drags a 38 square metre paragliding wing behind it until sufficient lift is achieved to get the skycar off the ground. Although this vehicle has already been involved in an accident and is inherently more difficult to control due to the nature of paragliding wings and their vulnerability in high winds I would still take the chance if somebody was to offer me a test drive/flight. The aesthetics of the vehicle in its land form are very appealing and the performance on land is faster than that of the current competitors as the top speed is said to be 140MPH with a maximum of 100MPH whilst in the air. 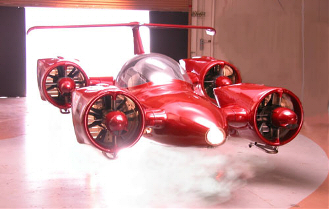 So what about the machine that gave birth to my fascination in this field, the Moller Skycar M400? Well upon investigation I was dismayed on two counts, firstly that without doubt the coolest looking attempt at a “flying car” had still not completed a flight other than hovering whilst tethered to a crane in 2003, secondly because actually it technically isn’t a flying car as it can not drive on the roads. Paul Moller the man behind the Moller Skycar has been trying to make the flying car a reality for over 50 years, he has however failed to achieve any other flights since the 2003 tethered test and some now believe the Moller Skycar to be unlikely to ever take to the skies despite claims that they have spent over $100,000,000 on research and development. I for one hope that this vertical take off and landing (VTOL) vehicle one day does overcome whatever problems are keeping it firmly on Terra firma as I want to see this beautiful machine screeching through the skies at 250MPH like a bat escaping from the fires of hell although with every year that passes without any further news or test flights the odds of this happening appear unlikely.